A month ago, I went for a week long vacation to Bhutan with my family.

It had been a destination we had been planning to go to for a while, having heard so much about its beauty, and considering it was so close by! Seemed like the perfect opportunity to explore a new never-before-seen place and take a break from our hectic city lives! My family being the extremely avid travellers however, made sure the trip was far from idle, and was filled with lots and lots of sightseeing – but who’s complaining? The road trips had gorgeous views, the locales were unique and the food was well, let’s just say, very experimental!

We stayed in the hill station of Paro for all 5 days, but visited many of the surrounding places. One of the highlights of the trip was when we drove up to the highest point in Bhutan – the Chelela Pass that stands at 4000 Mtrs above mean sea level. We were surrounded by such breathtaking horizons and blue skies! But what truly intrigued me were the white flags that I could see on all the mountaintops! These flags have an interesting story: they’ve been put there since times old to commemorate the dead and pray for their souls. Upon closer look you can see the prayers written on the flags from top to bottom, some absolutely frayed by decades of wind and snow! They best symbolize a place that is free from brutal propaganda, harsh distinctions, negativity and conflict! All that is found here is peace, good prayers and positivity! Sitting up there, meditating and breathing that cool air was such a contrast from life in Mumbai (especially since we had travelled via the ‘gas chamber’ that was post Diwali Delhi, to come to Bhutan!!!).

We then went on to travel to the ‘Haa’ valley, which adjoined the Chelela pass! It was a quaint place containing just a tiny village and one ancient temple, where we enjoyed a beautiful packed lunch by the riverside. The temple known as the ‘Lhakhang Karpo’ or the ‘White Temple’ was apparently built in the 7th century by a Tibetan emperor who also built another mirror image temple called the ‘Lhakhang Nagpo’, the ‘Black Temple’, on the Tibetan side! 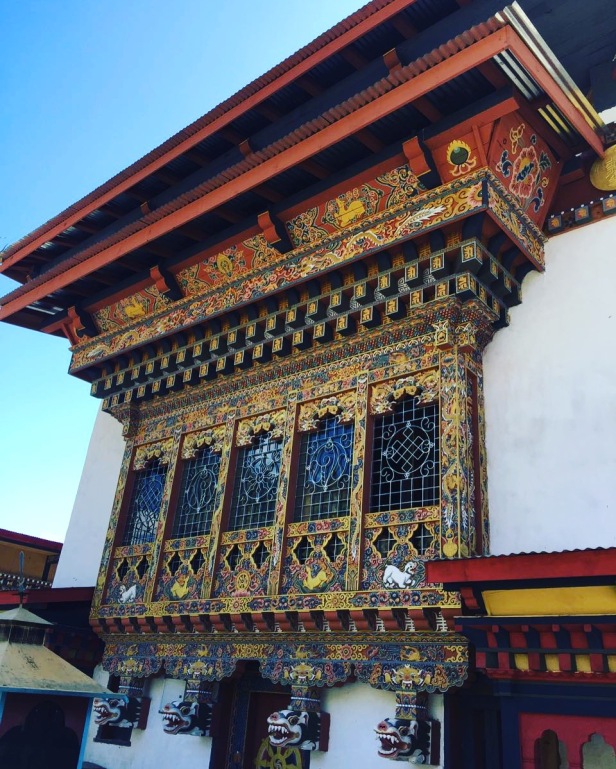 Another one of my favorite sites was the Great Buddha Dordenma statue located near the capital city of Thimpu! It is, as of 2016, the biggest Buddha statue in the world, reaching a height of 169 feet and grandly sitting at par with all the surrounding mountains! What a glorious sight to behold, the peaceful giant Buddha towering over all of us… I’m pretty sure it will be one of the new wonders of the world! 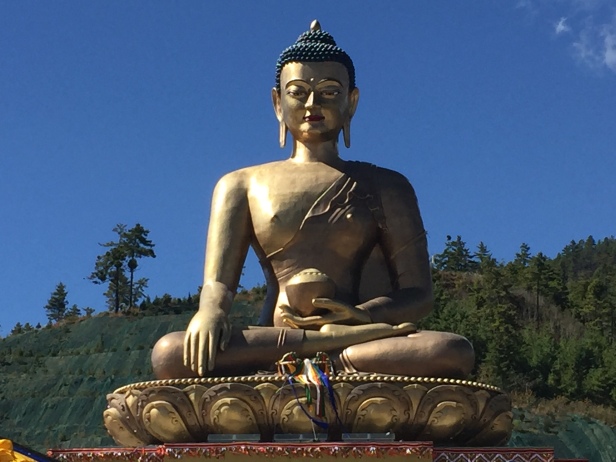 Whilst in the capital city we were also able to see the national animal of Bhutan, the Takin, in its natural habitat. This animal is explained in Bhutanese mythology to be a combination of a goat and a cow! It definitely didn’t look like any animal I had ever seen before, but upon further googling I found out that Takins are actually a ‘goat-antelope’ species! Interesting right?

Truly, Bhutan was an extremely engaging country with all its beautiful monuments, temples and of course, stunning natural beauty! Being a country that receives a large part of its revenue through tourism, we were greeted with many tourist friendly people and places and never felt unsafe or helpless! What is truly commendable is that it is one of the most environment friendly countries in the world with zero net emissions! A must visit place for all lovers of peaceful getaways, awe-inspiring vistas and some absolutely great weather!